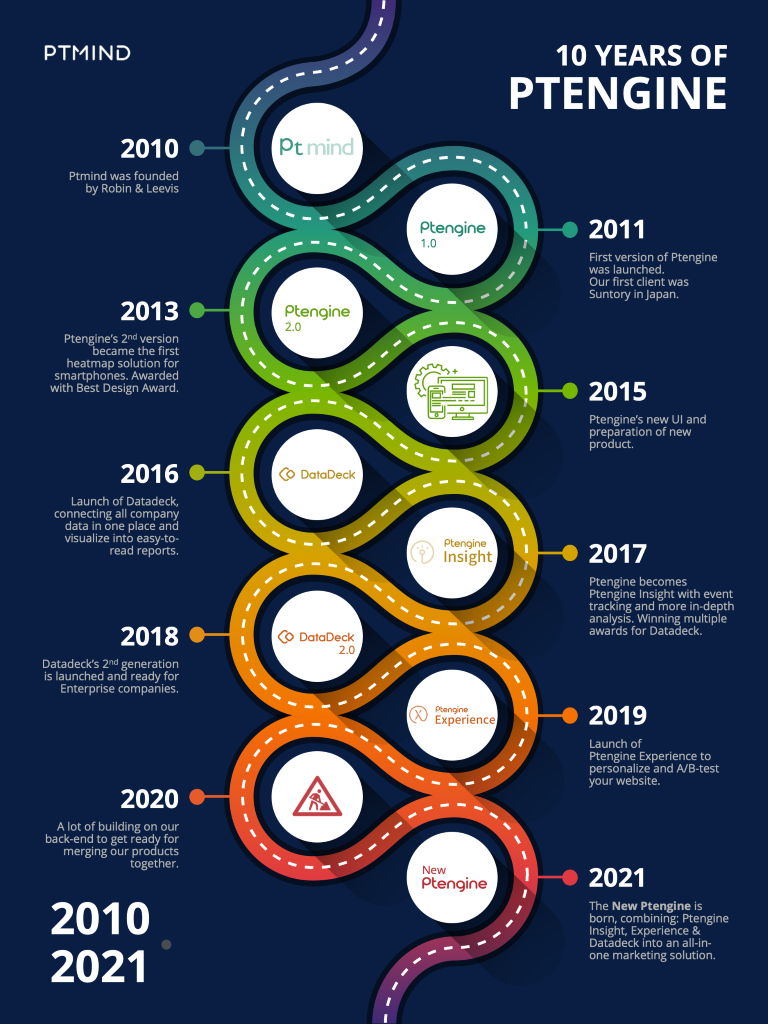 You can read this article in about 10 minutes

A long long time ago, I can still remember... No, it's not that song 😉

Sometimes you stumble on old documents, slide decks or designs in some random folder on your PC. In this case it was exactly that, cleaning up folders and for some reason opened one of our first pitch decks and saw the old design of Ptengine and that just before the launch of the latest version. It's quite hilarious to see the differences, but also the overlap and logical evolution over time. All-in-all enough reason and inspiration to write this summary of how Ptengine evolved over time in the last 10 years.

How it all started

In 2010 Robin and Leevis founded the company: Ptmind. With the idea of making data analysis more accessible and easy to understand for people around the world. A year later together with a small team they build the very first version of Ptengine.

The first version of Ptengine was cloud based as you'd expect from an early SAAS company and would track all major website stats including heatmaps. Ptengine was one of the first software solutions offering heatmaps to help everyone understand how a landing page was performing. Heatmaps reveal what the "hot" & "cold" areas on your website are. Showcasing where visitors are clicking, how far they scroll down and on what content they stop to read. One of the biggest advantages of heatmaps is that everyone understands them, without looking at any form of data.

Early 2011 Ptengine launched, and soon after Suntory Coffee in Japan became our first paying customer and is still collaborating with us on their marketing activities and online campaigns.

In the following 10 years a lot of things happened, not just for Ptmind, but also in the world of online shopping, data analysis, big data, personalization and so much more. Since the introduction of smartphones we are more connected and are spending more time online.

With the launch of the second version of Ptengine with tons of new features, a new design, Ptengine also became the first company in the world offering heatmaps for websites that were responsive on smartphones.

For Ptmind this was a major step into growing our customer base and got us nominated for multiple awards, in 2013 we won our first official award: the Best Design Award.

The older UI of Ptengine was completely dark, simply because that was the design. The funny thing is, in that time we weren't really aware of dark or light modes on our laptops, smartphones or in user interfaces. Over time we moved to a brighter version. In 2015 Ptengine changed from a dark to a bright UI. Not knowing yet, that a few years later dark mode would become so popular ;)

The world of SAAS companies has been growing extremely hard in 2015-2016 and Business Intelligence became a major focus for a lot of companies. Ptmind decided to launch Datadeck. An easy to use platform to stack all types of data together and create quick visualization without a lot of data knowledge. A new chapter for Ptmind started, widening its scope from web analytics into business intelligence, visualization and API integrations.

In this sample of the Datadeck; showing the interface and how to visualize the activations from last month.

Every visitor and client is unique

After one year of experience from Datadeck users and talking to Ptengine customers we had another breakthrough. Ptmind wanted to help companies with their data and marketing activities. By again widening its scope to add A/B-testing and Web Personalization features in a new product called: Ptengine Experience. The original Ptengine got upgraded with new features like event tracking and focusses on in-depth analysis and got rebranded as Ptengine Insight.

At this point in time the designs between all products are moving closer towards each other.

are in line with the brighter designs we used for Datadeck and all are moving closer towards each other already.

Ptmind has learned so much in the past 10 years about website optimization, user experience, data and its customers. With the New Ptengine all previous products are being bundled: Ptengine Insight, Experience and Datadeck into an all-one-marketing solution.

The power to combine all data into 1 place, create user segments, set up customer journeys, optimize their user experience with A/B-tests, offering unique and personalized content and run in-depth analysis... and all from 1 product: Ptengine.

Share the timeline to celebrate 10 years of Ptengine on your social media.

Have you used Ptengine in the past 10 years? Let us know in the comments how your experience was and which version you used ;)